Foul-baiting. It is a phenomenon utilized by many of the league’s stars. For good reason, a noticeable portion of them are polarizing to fans. Some professionals in this category include James Harden and Trae Young–both maestros in the technique of forcing the officials to call a foul on the victimized defender.

Fans of the sport have voiced their displeasure of these tacky calls, and the game with this absence has been magnified with the conclusion of the 2020 Olympics. With the event using the established FIBA ruleset, a multitude of NBA actions were not allowed in Tokyo.

NBA Superstar Damian Lillard voiced his experience of the game overseas compared to the NBA, stating in an interview with Mikey Domagdala of the Inside Buzz, “Best scorers in the NBA score from three and get fouled in FIBA, not as many foul calls; more physical. Also, no defensive 3 seconds so the paint is more crowded and refs don’t blow the whistle. It’s hard. There’s so many things that allow scoring to be easier in the NBA”.

It was only inevitable before the association took action. Preceding the 2021-22 NBA Season, the league determined that a multitude of typical actions taken by the players were “non-basketball moves.” Some of these include:

With the first few weeks of the season proceeding smoothly, it seemed that free throw attempts were down across the board. 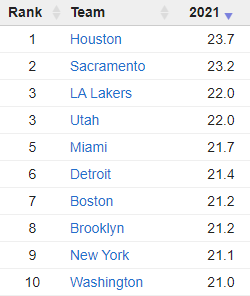 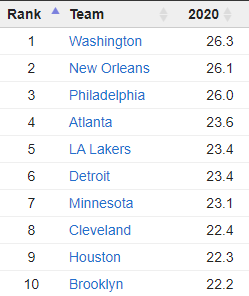 With these changes altering the number of attempts, some notable offenders and coaching staff members outcry at the tally and the decision to not benefit the atypical movement.

“Sometimes, I feel like, coming into a game, it’s already predetermined. I already have that stigma of getting foul calls” said James Harden. In addition, his head Coach Steve Nash called him the “poster boy,” for the new rules, both seeming visibly upset in various games throughout the first month of play. Harden, through the first 20 games, had only averaged 6.8 FTA/game–down from his average of 10.4 throughout his stint in Houston.

Another star hit by the recent rule change, Trae Young, also had words about referees swallowing their whistle. Complementary to agreeing with Harden about the stigma players have noticed, he ends in an interview saying, “I just hope they call it within the rules because I know the rules, too. I’ve done my research and my book work, too.” Through the first 20 games, Young’s free throws attempted in each contest averaged at 5.5–down from 8.7 just a season ago.

Even with stars disagreeing with the rule modification, the players’ adaptation has caused a noticeable decrease in the number of shooting fouls called, but is this change here to stay? Or is it merely a temporary occurrence?

Looking at the remainder of games played for the two stars aforementioned, along with other players, their FTA has increased considerably compared to their first 20 games played.

*Jimmy Butler has played a much lower amount of games past the Heat’s 21st game; left early in multiple games through this span

Looking at the statistics, the players who take mostly jump shots (Young, Harden, Curry) have been most affected by the rule change in the first 20 games. All three of Embiid, Antetokounmpo, and Embiid take a large portion of their shots closer to the basket–an area that hasn’t been as targeted.

Notably, every player’s free throw attempts after the first 20 games increased, excluding the injury-prone Jimmy Butler. The highest jumps (Young and Harden) have even upped their volume exceeding the amount totaled in their previous seasons.

Looking at the jumps between the two different points of the season, it is evident that officials have returned to benefitting foul maestros such as Harden and Young. But what exactly is the source for this resurgence?

A problem referees are facing is the health and safety protocol. According to Adrian Wojnarowski, more than ⅓ of NBA-level officials have been placed in the protocol, causing many games to undergo with either one fewer official or rookie referees taking the mantle. These prolonged absences can attribute to the resurgence of free throw attempts, with the understandable intimidation pushed upon inexperienced referees by the veteran NBA players.

With nearly half of the season remaining, the rule changes will be tested. Will the trend of free throw attempts stay as it has been? Or will the rule alteration prove successful with experienced referees returning to action? Regardless, with the sport rapidly changing, the association has to evolve.