There’s always going to be people who go against the popular opinion.

Unfortunately for the contrarians, the Nickell Robey-Coleman no-call was clear-cut. There’s no excuse to be made for the officials who elected to not throw a flag on the play. The receiver was hit before the ball arrived, the defender initiated contact with a helmet-to-helmet hit, and he never turned around to play the ball. It was the type of play you would show a new fan if you were trying to explain what pass interference was.

Therefore, fans were forced to look elsewhere for an excuse that would validate the Los Angeles Rams’ victory and invalidate the grievances of supporters of the New Orleans Saints.

As a result, this image has been circulating around social media as a response to claims that the Saints were robbed. 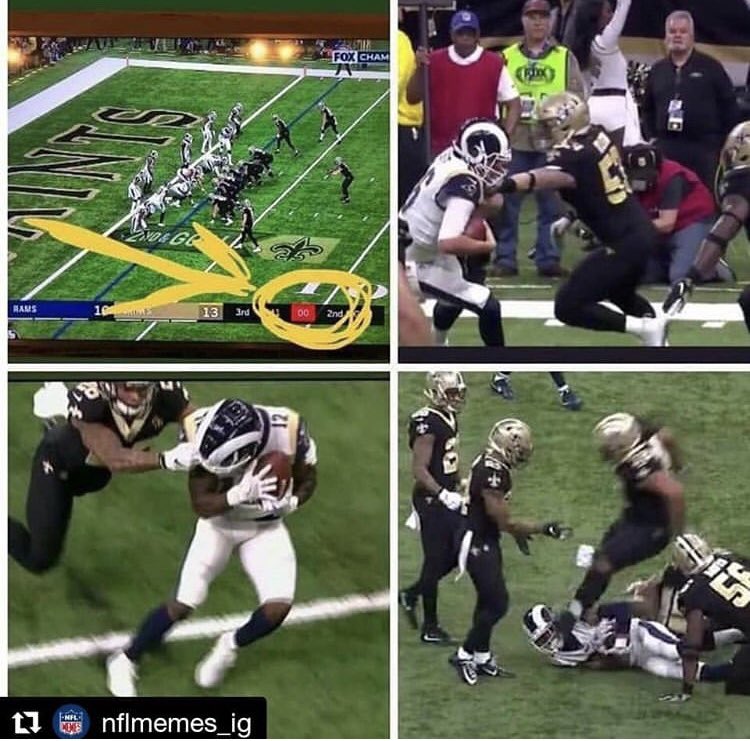 In the first 24 hours after the game, the narrative was that the Saints should have won the game if not for shoddy officiating. This narrative has completely switched and misinformation is spreading like a wildfire.

Let’s clear up the facts.

The top-left image implies that a delay of game penalty should have been called because the play clock hit zero.

The ball is snapped less than a second after the play clock hits zero. You may say, “Why does that matter? If it hits zero and the ball isn’t snapped, it should be a penalty no matter what!” Maybe, but that’s not how it has ever worked. “The back judge is responsible for keeping track of the play clock,” NFL spokesman Michael Signora said. “Officiating mechanics dictate that once the back judge sees the play clock expire, he then looks immediately to the ball. If it is being snapped, then there is no foul for delay of game.” In essence, there is an extra second built into the play clock. It’s not like basketball where there is a loud buzzer and red light that makes it easy for officials to notice when time runs out.

For some reason, the NFL is okay with this. Should they be? That’s a story for another day. The important thing is that a delay of game not being called here is consistent with how the league always officiates these situations.

There was outrage over this play because fans felt that it should have been an illegal facemask penalty, partly due to color commentator Troy Aikman spreading misinformation. There’s a common misconception that any contact at all to the facemask of an opposing player is a 15-yard penalty. Of course, this is not true. In high school, virtually any contact to the facemask is illegal, but the NCAA and NFL allow incidental contact. A penalty is not meant to be called if the player does not egregiously pull on the facemask. Incidental contact is allowed.

Dean Blandino, former NFL Vice President of Officiating, explained why he felt that the no-call was correct in the following video after the game. Of course, this is just his opinion. It wouldn’t have been outrageous if the official elected to throw a flag on the play. However, the fact that they did not do so is also not outrageous. Comparing this no-call to the Nickell Robey-Coleman no-call is simply ridiculous.

There’s a better case to be made that the play in the bottom-left image should have caused a flag to be thrown. While Williams quickly let go, he still did pull on the facemask.

Of course, this potential missed call had zero bearing on the outcome of the game because the Rams scored a touchdown on the next play. The individual who made the image was clearly running out of things to complain about.

I’m not even sure what is going on in the bottom-right image. I have no idea when it occurred and I don’t plan on rewatching the entire game to find it. It appears to be a still-shot which grossly misconstrues the situation. As I said, the individual who made the image was clearly running out of things to complain about.

More Blown Calls Against the Saints?

We have clarified that the narrative swirling around social media is complete hogwash. We dispelled the myths of blown calls against the Rams. It would be reasonable to stop here. After all, the Rams’ supposed struggles were fabricated while the pass-interference no-call at the end of regulation was undoubtedly flagrant.

Let’s take it a step further.

The Other Nickell Robey-Coleman No-Call

I keep referring to the more well-known play at the end of regulation as “the Nickell Robey-Coleman no-call” because Robey-Coleman was the Rams defensive back who committed the uncalled penalty. However, this name is a bit unclear because it wasn’t the first blatant pass interference he committed that went unnoticed by the officials. We’re going to need to think of a name for the more infamous play so that this confusion is avoided. Tip-Gate? The Crescent City Robbery? The Whistle Not Heard ‘Round the World? Yeah, I’m not the best with names.

It’s a clear defensive pass interference penalty. Robey-Coleman instigated excessive contact which didn’t allow Ginn to make a play on the ball. Former Vice President of Officiating Mike Pereira agreed in this video that a DPI should have been called and given the Saints an automatic first down. A first down would have placed the Saints in field goal position. If they scored three points (and not a touchdown) on this drive, the field goal they scored after the second missed call on Robey-Coleman would have made it a six-point game. In other words, this missed call impacted the game — certainly more than any of the no-calls that supposedly favored Los Angeles.

Illegal Hit Takes Josh Hill Out of the Game

In the first quarter of the game, Saints tight end Josh Hill was hit in the head after a 23-yard completion. He struggled to stand up as he appeared to be concussed. He was initially forced out of the game by officials, and he never returned.

Hill appeared to be a relevant factor in the Saints’ gameplan, as he was on the field for 70% of the team’s offensive snaps. Ben Watson was inactive for the game so the Saints were left with Dan Arnold and Garrett Griffin at tight end. The Rams were not extremely successful guarding tight ends in their last matchup with New Orleans. Watson accumulated 62 yards and a score, his best game of the season. Hill’s presence as a run blocker has also been extremely vital for the Saints this year. Some fans argued that the officials were “letting them play.” It’s a silly argument considering player safety should be a priority. Even if they were allowing a more physical brand of football, it clearly had a negative effect on the well-being of their players.

The most common rebuttal against officiating complaints has been that the Saints had a chance to win the game in overtime. That’s true. It’s also true that a team should never need to win a game twice — the officiating should simply be fair from the start. Even if we ignore this obvious point, the interception should not have occurred if the NFL enforced their roughing the passer rule.

According to the rule book, it is considered a roughing the passer penalty if defenders “use hands, arms, or other parts of the body to hit the passer forcibly in the head or neck area.” This is reminiscent of a late game call against Marcus Davenport in the Divisional Round. The excuse that the NFL doesn’t want to call flags like this in clutch time is therefore not valid.

The point isn’t that the NFL should hold a rematch between the Saints and the Rams.

The Rams are in the Super Bowl and that isn’t going to change.

The point is that it is perfectly valid for fans to argue that the officiating in the NFC Championship Game benefited the Los Angeles Rams more than the New Orleans Saints.

Let’s not allow revisionist history to control the events of January 20th, 2019.